Letter to Santa delivered after more than 100 years 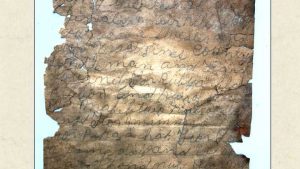 Letters to Santa hidden behind a chimney mantle for more than 100 years  were recently revealed during a town’s Christmas celebration.

Two children, whose great-grandparents likely played with the letters’ authors, delivered them to Santa during the Beverly Old Fashioned Christmas.

One of the letters, written Dec. 25, 1912, by Page Woodward, who was then 8 years old, sought gifts for her brother, sisters and parents before asking for something for herself, the Charleston Gazette-Mail reported:

“Will you please bring these things. For Reginald, a air rifle, a Boy Scout book, a sweater and two magazines, Country Gentleman and Farm Journal. For Ruby, black ribbon and pair of stockings. For Mabel, two pair of stockings. For Mamma, a book. For Papa, a hat. For Teddy (her sister Henrietta’s nickname), a game, doll and a lot of candy and nuts. For my self, a doll, leggings and lots of candy and nuts.”

The letters were discovered during renovations to the Beverly Heritage Center, a history museum built into one of the town’s historic buildings. It is believed they fell between the chimney wall and mantle 106 years ago.

The letters offer insight into what life was like more than 100 years ago.

“Writings from children rarely survive,” Christopher Mielke, who created an exhibit to showcase the letters, said in a statement. “Letters to Santa are especially insightful because children genuinely believe that Santa will read their words himself — values of honesty, generosity, and sharing are at the forefront.”

The letters are on display at the history museum until the New Year.