When newlyweds Clayton and Brittany Cook decided to pose for their wedding shots on an Ontario park bridge, they certainly didn’t expect the news to show up anywhere except maybe the lifestyle section. That is until the groom noticed a boy in obvious distress in the water below.

“His face was underwater and he was fighting, like he was really fighting,” 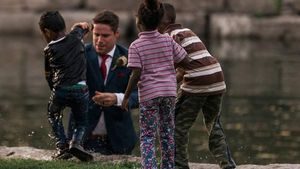 So he did what any decent person would do. Fancy suit or not, he jumped in to save him. Luckily for the rest of us, their wedding photographer Darren Hatt was already locked and loaded to capture the moment.

“By the time the bride noticed and shouted out, Clayton had already jumped down and brought him to safety,” Hatt wrote on Facebook along with two images of the groom’s daring dip.

“We were shooting the bridal party after the ceremony. We had moved on to shooting the bride and groom and at one point the bride asked me to shoot some solo pictures of herself so she could see pictures of her full dress. At that point I had my back to the river, and the groom was behind me as well too.“At some point, the bride shouted out and pointed towards the river. Just as quickly as I had turned around, the groom was already in the river scooping up this little guy by his arm.

“I wasn’t witness to how he fell in there but the groom told me that he was pushed in by another kid his age.