The tiniest police dog in the world

Meet K9 (Canine) Midge. She’s a Chihuahua and Rat Terrier Mix and weighs only 8 pounds.
She is certified by the Guinness World’s Records as the world’s smallest police dog. 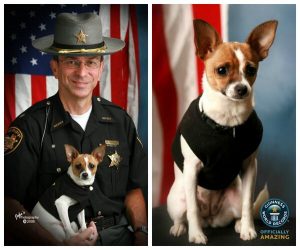 Despite her miniscule frame, Midge has been fighting crime in Cleveland for 9 years.
She works for the Geauga County Sheriff’s office in Cleveland, Ohio.
Her important work includes teaching kids about serving their community and how to avoid stranger danger.
She’s also celebrating her 9th year bustin’ Cleveland area drug traffickers in the cutest way possible.
Midge became an official narcotics dog only one day after her first birthday.

Midge’s work has earned her recognition all over the world.
The police department reports that she receives fan mail from Europe, China and South Africa.
She even has her own email address for adoring fans to contact her.

Watch the video below: